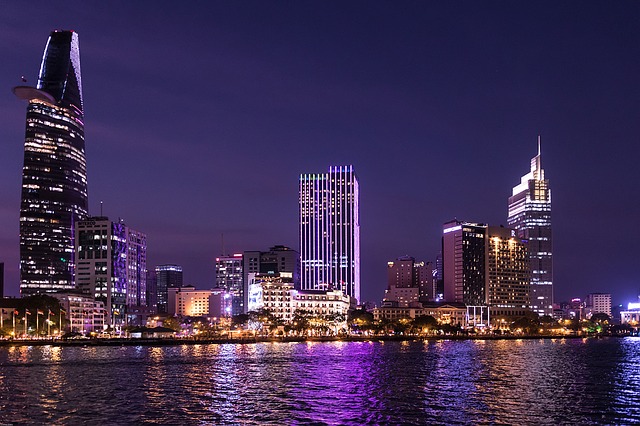 Leading electronics manufacturers such as Intel, Samsung and LG operate production facilities in Vietnam. And the number of companies moving in to reap the country’s strategic advantages is on the rise. Have you considered Vietnam as an investment location? Here is why you should.

Vietnam’s economy has experienced exceptional growth during the previous 2 to 3 decades, allowing it to transform from an extremely poor to a lower middle- income country. The developments leading to this status were described in our previous publication, also highlighting Vietnam`s growing relevance as a new manufacturing hub. The country´s electronics and mobile phone manufacturing sectors, in particular, show high potential. For further information on the evolution of Vietnam’s economy, please refer to MIT’s Observatory of Economic Complexity.

A significant number of global enterprises, from both electronics and mobile phone sectors, set up manufacturing sites in Vietnam over the last 10 years. Today, these two sectors, led by foreign enterprises, account for more than 23% of Vietnam’s total exports. 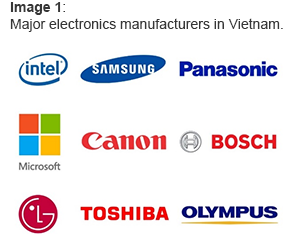 A major player in the field of electronics already operating in Vietnam is Intel. In 2006, the manufacturer of semiconductors announced that it will invest more than 1 billion USD in a chip assembly, testing and manufacturing plant in the outskirts of Ho Chi Minh City. The plant commenced operations in 2010, and currently employs more than 1,100 people, with the intention to employ up to 4,000 people. According to Intel Vietnam´s General Manager, Sherry Boger, Vietnam is positioning technology at the center of the country’s development goals. As a consequence of the successful efforts in establishing a dynamic envi-ronment for the technology industry to thrive in, in 2015, Intel started adding more complex products to its portfolio, including central processing units and systems on a chip. The Silicon Valley-based company predicts its factory, as well as the general technology ecosystem in Vietnam, to steadily rise in the value chain over the coming years. Intel is only one of a number of global leaders currently operating in Vietnam. You may refer to Image 1 for a list of major global manufacturing players in the Southeast Asian country.

Apart from electronics, the textile and garment sector is the second most important source of Vietnam’s exports, currently accounting for 13.9% of goods being sold overseas. This is one of Vietnam´s traditional sectors, having attracted investment from a majority of leading producers in the previous 20 to 25 years.

The first reason that comes to minds of many is cheap labor. We are not going to shy away from this logic, but would like to include additional arguments why Vietnam managed to attract a significant number of foreign direct investments.

The first alternative reason is geography. While Vietnam is located in the middle of the ASEAN it also shares a boarder with China. This strategic position allows companies operating in Vietnam easier integration into existing regional and global supply chains, especially present in China. Besides, sea ports in Northern, Central and Southern Vietnam allow accessible and practical shipment to any part of the world. Furthermore, transportation of goods in Vietnam is easier than in archipelago nations such as the Philippines and Indonesia.

Another reason lays in its people. The 90 million Vietnamese are young, with 65% of the population being less than 40 years old. This youthful population is motivated to work and eager to learn and develop professional skills. Furthermore, Vietnam is now in a period known as the “golden population structure”, which means that there is one dependent person for every two working people. Hence, these demographic conditions create an abundance of labor force.

Also, Vietnam’s high political stability, especially compared to some of its neighbors, is perceived as another important reason that attracts foreign companies to invest in the country.

Finally, as macroeconomic conditions such as an aging workforce and rising wages become increasingly challenging in China, many manufacturers choose to establish or relocate their production facilities from the northern neighbor to Vietnam.

Vietnam’s is seeing a major new development that will make the country more interesting for foreign investors: it is becoming a determined participant in the global economy by engaging in Free Trade Agreements.

Firstly, Vietnam is involved in FTAs through the Association of Southeast Asian Nations (ASEAN), which it is a member of. ASEAN signed a number of FTAs, starting with the ASEAN Economic Community, which allows free trade among 10 member countries, followed by FTAs with Australia & New Zealand and China. Furthermore, ASEAN has strengthened its economic ties through signing Economic Cooperation Agreements with India and Japan.

Coupled with the ASEAN-related FTAs, in the previous 3 to 4 years, Vietnam further increased its presence in the global economy by signing bilateral and multilateral FTAs.

The first one was the FTA with Chile signed in 2012, followed by the FTA with South Korea in December 2015. Considering that South Korea was Vietnam’s major foreign investor in 2015, and recognizing that leading Korean enterprises such as Samsung and LG are already strengthening their presence in Vietnam with new investments (Samsung solely employs over 80,000 people in Vietnam), it can be argued that the newly-signed FTA will boost new investments in Vietnam coming from the north-east. Also important to note is that Singapore is the only other ASEAN country that has signed an FTA with South Korea.

Furthermore, Vietnam is the only country from the ASEAN that signed an FTA with the Eurasia Economic Union (Russia, Belarus, Kazakhstan, Armenia and Kyrgyzstan).

Finally, the two multilateral trade agreements that Vietnam will participate in, EU-Vietnam FTA and Trans Pacific Partnership (TPP), are understood as agreements that will have the strongest impact on Vietnam’s economy and society. The promise of free trade with economies such as the US, Japan, Germany, UK and France will open many doors for Vietnam, its companies, but also foreign enterprises with operations in the Southeast Asian county.

Compared to the other ASEAN member states, Vietnam is one of the leaders when it comes to the number of FTAs signed, with only Singapore and Malaysia being in front. It is remarkable to see that a country that was locked out of the world only 30 years ago became more open and more interlaced within the global trade than Thailand, the Philippines and Indonesia, all of which have been part of the world economic system for a longer period. For a graphical overview of view of all of Vietnam’s FTAs, see Image 2.

We at BDG believe that Vietnam’s strategic geographic position, its hardworking people, ample market size and its openness to the global trade will help the country boost its economy, while also creating a great number of opportunities for foreign investors. If you would like to enter and operate in an exciting market in the middle of ASEAN, we would be honored to show you the way 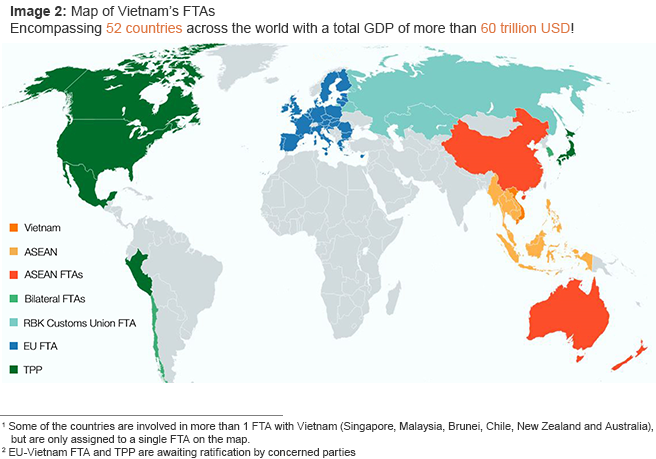